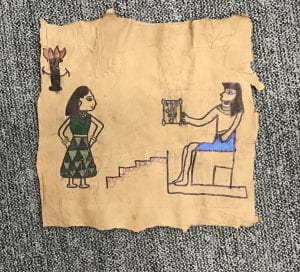 Anukata shook her head. “Why did you name me Anukata, ‘um?

Anukata looked down at her beat up tunic, that once was a color close to white. “‘Um, I am not even a fraction of what a princess would be. I know of no princess whose family couldn’t afford flour or oil. Money is not a problem for princesses.”

Anukata’s mother redirected Anukata’s face to face hers. “Princess, money doesn’t determine anything. Knowledge, determination, and wisdom is what matters. You are very wise for your age you know, and you shall never take that for granted.”

Anukata thought about her mother’s intelligent words. She whispered a soft goodnight to her mother, and kissed her wrinkled forehead. She crept down the uneven wood staircase like a chill going down a spine. Anukata made sure she was quiet enough not to wake the others. As she pulled her thin cotton quilt over her body, she thought, ‘Anukata the princess. Well maybe ‘um is right. My chance will come.’ Anukata wrapped herself tightly in her blanket like a swaddled baby.

The next morning Anukata did her chores which to her seemed as if they took a million hours. Anukata always felt as if the chores were teasing her. After she finished her jobs, Anukata met up with her good friend Dillia near the well. They decided they wanted to go to the Nile to bathe. As the girls trudged through the muddy, wet but still fertile ground to get to the river they stopped to admire the pharaoh’s beautiful palace.

“Oh, don’t be so naive.” voiced Dillia, her words sharp and rough that snapped Anukata out of her daydream.

“Oh Dillia, please don’t start this again. I know. Just because I am admiring this beautiful palace, doesn’t mean I think it is there for the right reasons.”

Anukata knew how Dillia felt about pharaohs and the people who were more than them—humble peasants.

Just them, Anukata heard yelling. “Come over hear now!” Whoever was trying to grab their attention, obviously was not too happy. When  they looked up they saw the pharaoh’s right hand man coming towards them, as enraged as a mocked ox. When the man finally got to where they were, they were surprised that he just told them to  follow him back to the palace. Anukata and Dillia both as scared as a rabbit in a wolf pack, quietly followed behind that wealthy looking man.

It didn’t take too long to get to the elaborately decorated arch entrance. Walking through the narrow corridor leading towards the pharaoh’s throne, Anukata couldn’t focus. There was a ton of things going through her brain. ‘What is going to happen when we meet the pharaoh?, ‘Oh look how nice those sculptures are!,’ ‘Stop, focus.’ I wonder what Dillia is thinking right now.’ Through all these thoughts and concerns, Anukata didn’t even know that she was standing in front of the pharaoh.

The piercing, icy cold words of the pharaoh startled Anukata. Anukata glanced glanced towards Dillia. DIllia looked both scared and mad but was trying to conceal her emotions.

“Who had permitted you to stand on my fertile soils!” declared the pharaoh. I need an——

Before the pharaoh had finished his claim, a soldier bolted into the throne hall. An annoyed and frustrated scowl crossed over the pharaoh’s face.

“What is so important that you have to interrupt this hearing?”

When the pharaoh mentioned that this was a hearing, Anukata realized that she might not just be sent out with a warning. She might get a sentence. Anukata focused her attention back on the soldier.

“My apologies, oh mighty pharaoh, but at the foot of the palace gate, was left a scroll in a foreign language that none of our scribes can decipher.”

“Bring me the scroll.” commanded the pharaoh.

“Speak up child!” the pharaoh retorted.

Anukata gently grasped the scroll. “It is a letter from the Abanoub people.”

“The same Abanoub people we have been fighting with?”

For a moment the whole room was silent, but then, as if it was a miracle a small white dove flew into the throne hall and perched on Anukata. The room was as silent as the early hours of the morning. The pharaoh for once was speechless. Dillia couldn’t believe it. The guards and soldiers were shocked. The pharaoh looked Anukata dead in the eye, with disbelief written all over his face. When the pharaoh finally got blessed with a tongue he gestured to the big gap in the throne room that had the greatest view of the empire. He pointed to a beautiful estate to the right of the view. “Do you see that estate over there? That is now you, your family and friends’ estate. You are now anointed to be my first hand in language affairs.”

If anything could’ve gotten better for Anukata, something better occurred next. “I have a special gift for you Anukata.”

One of the guards that Anukata seemed to not notice handed Anukata a golden box.

“I’ve been waiting to find the right person to give this to, and I think I have found them.”

When Anukata. Opened the beautiful gold plated box, she saw the most precious tiara she had ever seen. Anukata was speechless.

In that very moment Anukata felt like a true princess.